Love Blooms at the Apple Blossom Inn is a Sweet Treat 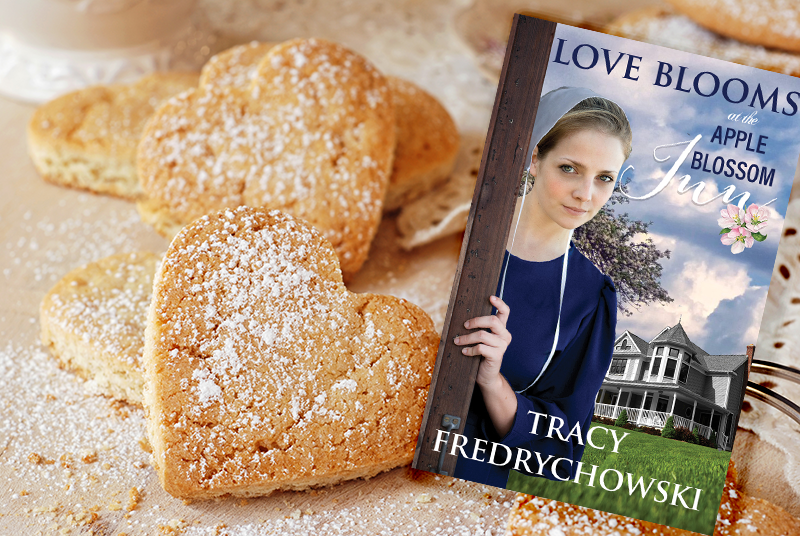 Here is a sneak peak into the first chapter…

Maggie Fisher stood on the porch, potholders in hand looking through the glass of the wood-fired double oven. The sheltered porch did little to stop the Central Wisconsin wind from sending clouds of powdered snow up under her skirt. The outdoor kitchen her Datt built five years ago was a welcomed relief to the summer heat but did little to warm her in the coldest months of the year.

A soft glow was starting to peek its way above the horizon, and it wouldn’t be long before the first of their regular Friday customers began to make their way up the long winding driveway that led to their in-home bakery. Her oldest bruder was already clearing the snow from the driveway, and Hannah, her youngest schwester, was busy putting whipped frosting between layers of chocolate hand pies. Maggie smiled as she thought how it took the whole family to make sure the bakery opened by eight every morning, except Sundays, of course.

Cracking the oven door just far enough to see if the edges of the sugar cookies were the perfect golden brown, she reached in and lightly touched her finger in the center of the cookie checking if they were done. Glancing up at the timer, she rarely used. A longing filled her heart as she remembered how her Mamm had joked about neither of them needing a timer; they both instinctively knew something was done by how it smelled. She couldn’t explain it, and neither could her Mamm, that was before she died two years earlier. After placing the hot cookie trays on the bakers rack near the door, it would only take a few minutes before they were cooled and ready to frost. 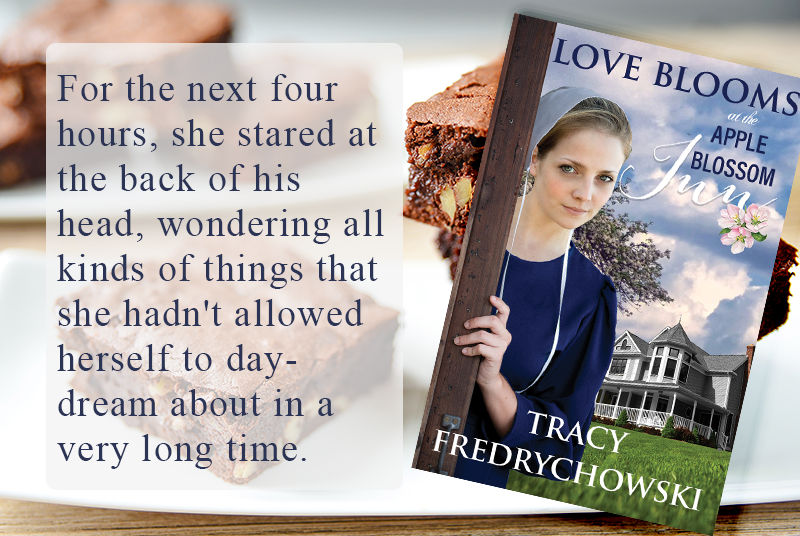 Hearing the squeak of the rusty hinges, she turned her head in the direction of Hannah’s voice.

“Datt is headed out to the barn and said he wants to talk to you when you’re caught up. I can take those if you want.” Hannah said as she reached for one of the trays.

“The barn, why would he want me to go there? He knows I need to finish these cookies. The shop opens in less than an hour. Oh, help!”

Pulling her heavy black coat tighter around her middle, she walked down the steps and tucked her chin close to her chest, bracing herself against the wind that whipped across the open yard.

The pungent odor of manure mixed with the sweet smell of hay tickled her nose as soon as she pushed the heavy steel door open. Steam rose from the nostrils of the full uttered Brown Swiss cows that lined either side of the barn. Milking all forty cows twice a day by hand, her Datt and bruders worked filling ten-gallon milk cans that lined the milk house wall. Every ounce, except the little he let her keep, to make cheese and butter for the bakery, was sold to the cheese factory in town.

Walking to where her Datt sat with his head rested on the side of a cow, she waited until he stood to empty his bucket before she spoke.

“Hannah said you wanted to see me.”

Carrying the silver bucket with him, he motioned his head in the direction of the milk house and didn’t say a word but expected her to follow. Once inside the clean small cinder block addition, he poured the bucket of fresh milk through the filtered lined bucket in the stainless steel sink. 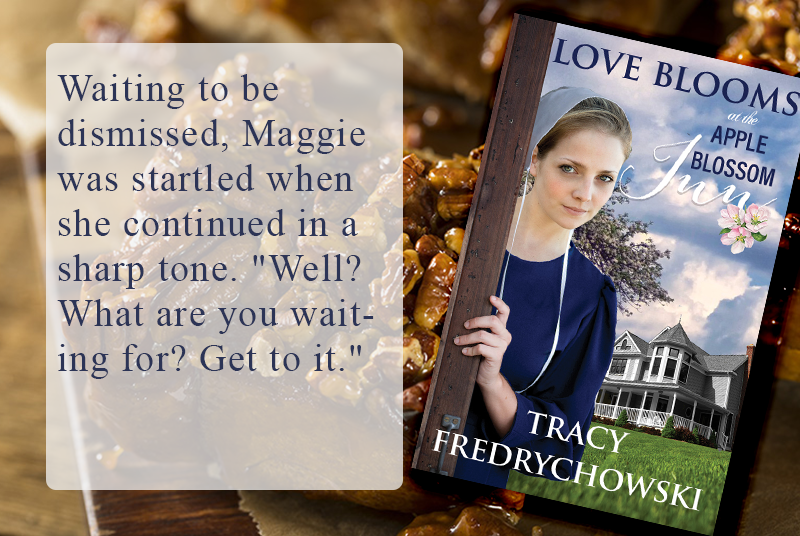 “Shut the door,” he said in a gruff voice.

Waiting patiently for him to get to his point, she tried not to seem aggravated that he had interrupted her baking. He was a man of few words, and she knew all too well not to rush him.

Turning to face her, he crossed his arms over his chest and leaned back on the sink and asked.

“You’ll be twenty-four next month, right?”

Picking up the towel that hung over the edge of the sink, he said.

“It’s time you find a husband.”

Shocked by his comment, it took her a few seconds to fully comprehend what he said before she answered. “What for?”

“What do you mean, what for? I’m sure your Mamm had that talk with you a long time ago.”

Not typically prone to embarrassment, she couldn’t help but blush at her Datt’s mention of the ‘talk.’

“I know that,” she said in a hushed tone. “I mean, why do you think I need a husband now? There’s too much to do around here to worry about such things.”

Standing up straight and turning to check on the milk that was trickling through the layers of cheesecloth, he said. “My point exactly. As long as you’re busy taking care of this family, you won’t make time to start one of your own.”

“But I don’t mind. I love baking, and I wouldn’t dream of letting Mamm’s bakery business go.”

With a stern voice, he answered.

“Hannah is more than capable of taking over the bakery, so I’m sending you to your aunts in Pennsylvania.

“To Willow Springs?” she said in a louder than respectable tone.

“You leave on the Greyhound first thing Monday morning. A driver will take you to the bus station, and your Great Aunts will secure a driver to pick you up in New Castle. You should arrive late Tuesday afternoon.”

Trying to control the heaviness creeping up in her chest, she decided to soften her tone before she continued. “But Datt, what on earth am I going to do in Willow Springs? I don’t know anyone there, and all I know about Aunt Teena and Lizzie is they’re spinsters. If they couldn’t find a husband there, what makes you think I will?”

“Not sure you will. Especially since you’ve chased every boy within twenty miles of this place away with your sharp tongue. I’m figuring if I send you to a new town, your reputation might not follow you, and there might be some fellow willing to give you a try.”

“Datt, how can you say such things?”

“Can you prove me wrong?”

Not answering his question, but pleading with him, she said. “But you need me around here.”

“As I said, Hannah is plenty old enough, and I’ll be chasing her off this farm as well someday.”

Lowering herself to a milking stool near the door, she propped her elbows on her knees and rested her chin in her palms. Looking up at him, she said. “You can’t be serious.”

“Look, I promised your Mamm I wouldn’t expect you to fill her shoes forever. It’s been two years now; it’s time.”

Shifting his weight and running his hand through his brown and white speckled beard, he said. “You have a job waiting for you at the Apple Blossom Inn.”

Pouring the filtered milk in the waiting can, he secured the lid, picked up the empty bucket, and headed toward the door. Stopping only long enough to say. “You have many wonderful qualities, but your eagerness to always have the last word …well, that might take a special kind of man.”

Letting his words sink in, he paused in the doorway to add. “For sure and certain, you won’t find him here in Tomah.”

As if she was frozen to the stool, Maggie didn’t move even after her Datt had long gone. Thinking to herself, she thought. How can he send me off to live in a strange town, with people I barely know, it’s plain crazy! The last thing I need right now is a husband.

The way she saw it, he didn’t hold much hope of her finding a suitable mate in her community. All of her friends were already married with children of their own, but she was hardly spinster material. Or was she?

Find it on Amazon