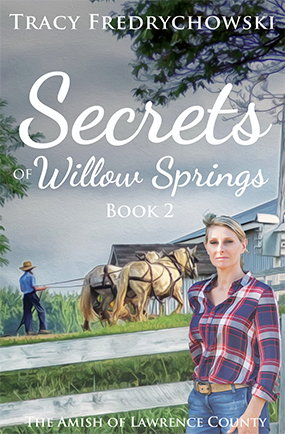 After spending sixteen years in prison, Marie Cooper is forced to return to Sugarcreek, deep in Amish Country. Forced to take the only job available to her, she finds herself working for wealthy Nathan Bouteright. As her late husband’s memory continues to follow her, who will hold the key to unlock so many unanswered questions about her past? Will she be able to help Emma and Daniel come to terms with who they are, and can they forgive the one person who played God with their lives?

When Marie struggles to get Nathan to trust her, will it be his four-year-old son Amos who shows them there is more to a person than what is on the outside? Or, will a letter from her deceased mother help her find her way back to her faith and the exact place she dropped her thread of obedience?

The early morning light had just started to flood the corridor when the seven o’clock bell rang. The steel lock that kept Marie Cooper in her cell slid open, and an armed guard was waiting to escort her to Processing. Pushing herself off the bottom bunk, she reached for the small canvas bag at her feet that contained her meager belongings and headed for the door. Stopping only for a second to look back and wave goodbye to her cellmates, she suddenly felt a sense of sadness. These women had become like family. Even though she hated to admit it, she felt closer to them than she did her own.

Walking through the double doors that separated her from the outside world, Marie was stopped and patted down by two female guards. Once through the reception area, she found herself sitting at a desk listening to the monotone voice of the discharge officer. Signing her name to a form indicating she understood she could not vote, carry a firearm or leave the state of Ohio, she then laid the pen aside and folded her hands on her lap. Her heart raced as the officer read the date and time she was to report to her probation officer and the monthly amount that would be due in thirty days to pay her fines.

After the officer finished all of her release documents, she directed Marie to move to the counter at the back of the room. There she found herself looking down at the items that had been emptied out in front of her. Listening to the inventory being rattled off by the large woman behind the counter, each piece forced her to remember something she had tried hard to forget.

Against the wishes of her mother, Marie had run away with the first boy who paid any attention to her. When the bruises became too hard to conceal, and all of her mother’s predictions came true, she cut off all ties with her.

“One pair of jeans and one pink T-shirt.”

The blue stretchy material reminded her that she hadn’t even gotten a chance to work off her pregnancy weight before being arrested.

Just another reminder that she never got to raise her daughter. The sound of a baby crying still haunted her dreams.

At the age of fourteen, after giving her life to Christ, her mother surprised her with the simple gold cross. It was all she had to remember her by now.

The woman pushed another form at her to sign and pointed to the area where she could change out of her prison clothes and into the ones in front of her. She scooped up her belongings and headed to the changing room.

Closing the door with her foot, she leaned back and tried to ward off the tears that were pooling in her eyes. This day was supposed to be happy, but the fear she felt was traumatizing.

Pulling the prison issued blue shirt over her head, she caught a glimpse of herself in the mirror. Her golden hair was now showing signs of silver flecks at her temples, and the brown eyes that once had been full of hope and wonder had turned cold and lifeless.

Slipping her legs into the loose jeans, she realized not only had her body changed, everything about her was different. Years in prison had hardened her, and she wasn’t sure she liked who she saw in the mirror.

She had failed her children, but more importantly, she felt like she had failed God. Killing her husband to protect an Amish man she didn’t know, giving her baby away to a stranger and signing over her parental rights so her son could be adopted had changed her. The only stability in life had been her mother, and she had long passed away. She had no one who cared or, better yet, no one who loved her. Daniel Miller, her son, was only helping her out of duty, and he’d made it clear he wasn’t happy about letting her back into his life. He was her only connection to the outside world she had been shut off from for so long.