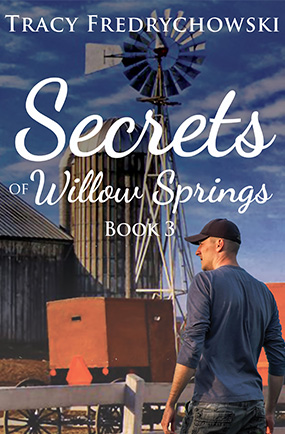 Can an English family find peace deep in Amish country in this Christian Amish series filled with lies and deception?

Secrets from the past make a full circle as Daniel Miller faces the truth about his Amish family.

Raised English, he was left to fight his way through foster care, believing he had no living relatives other than his imprisoned mother. Only after finding his biological sister, Emma, was he made aware of Bishop Shetler’s lies and deceit.

When life becomes too hard to bear will Daniel turn his back on his family, and drown the pain like his father did so many years ago? Can he forgive the man who ignored his existence, and will Katie Yoder be able to help him see God’s true plan?

Two worlds collide in this final book of Secrets of Willow Springs. Read how Emma Byler, Marie Cooper, and Daniel Miller pull from their Amish heritage to face life’s most difficult challenges.

Standing behind Emma to protect her from ice pellets stinging the back of his neck, Daniel Miller waited for his sister to tell him she was ready to leave. Everyone who had come to pay their last respects filed past, adding a shovel of dirt to the top of her mother’s grave. Within minutes the sounds of buggy wheels on the snow-covered ground faded only to be replaced by an unnerving quiet. Emma Byler didn’t make a sound but stood frozen to the spot that held her for the past hour. Ignoring the pleas from her datt to leave, Daniel assured Emma’s father he would take her home.

Glancing behind him, as the last of the buggies pulled away from the cemetery, he reached in his pocket and pressed the remote starter to warm his truck. Resting his hands on either side of Emma’s shoulders, Daniel rubbed small circles through her black wool coat to generate heat, as he rested his chin on top of her thick brown bonnet and said.

“The temperature’s dropping, will you please let me take you home now?”

A sob lodged in her throat, and it took him a second to understand what she was saying. “I don’t want to leave her,” she said in a labored voice.

He pulled her closer and said in a hushed tone. “I know, but she wouldn’t want you standing out here in the cold either.”

“I can’t believe she’s gone. I know this is Gott’s will, but how am I going to live without her?”

Turning her around and guiding her to his truck, he answered. “I’m not sure, but we’ll face it together.”

Making their way through the rows of small white headstones, they stopped and waited for the approaching van to pull up beside them. No sooner had the vehicle come to a complete stop, the door slid open, and Nathan and Marie got out.

“Mom, Nathan, you came. How did you get permission to leave Ohio?” Daniel asked.

Nathan reached out to shake Daniel’s hand. “It took some doing, but we got Marie’s probation officer to sign the release allowing her to travel to Pennsylvania. We would have been here sooner, but Interstate 80 was a sheet of ice.

It didn’t take Emma any time to find her way to her biological mother’s open arms.

“It happened so fast. The doctors felt certain the chemo would help, but cancer had already spread to her bones.” Emma said in a raspy voice.

Marie pulled her in closer and said. “I’m sorry I couldn’t get here faster.”

“Maybe you’ll have better luck getting her out of the cold,” Daniel said, blowing warm breath into his cupped hands. “I’m having a hard time getting her to leave.”

Breaking the embrace long enough to look in her daughter’s eyes, Marie said, “You’re not going to do anyone any good if you end up sick. Please, let’s get in the van.”

Nodding her head in agreement, Emma let her English mother guide her to the open door.

Daniel pointed to his truck. “Have your driver follow me.”

Stepping in the van and making her way to the bench seat in the back, Emma took comfort in the warm vehicle. Her mother took her place in the second row and moved over so Nathan Bouteright could sit beside her. It only took a few minutes to catch up to the procession of yellow-topped buggies making their way back to the Byler farm. The slow journey magnified a stillness in the van as they traveled through the back roads of Willow Springs.

The announcer on the radio reminded her it was the last day of the year, one she’d soon never forget. Leaning the side of her head on the cold glass, she closed her eyes as the past year’s events flashed in her mind.

Learning Daniel was her biological brother.

Picking up her English mother, Marie, from prison.

And …watching her Mamm’s smile fade as cancer took her last breath.

Fresh tears met the place on the window where her cheek rested, and her chest tightened, as she thought.

Will I remember what she looked like or the smell of her favorite lotion?

Or, the softness of her touch?

How will I recall what her voice sounded like when she called my name?

Oh Mamm, how will I do life without you?

Opening her eyes just as Nathan whispered something in her birth mother’s ear, she couldn’t help but smile at the sight. It had only been three months since leaving Sugarcreek to come back to Willow Springs to care for Stella, but by the looks of things, Marie had found peace with Nathan. The black lace head covering she wore was an indication her mother had found her way back to God, and the thread of obedience she longed for.

Wiping a small opening on the fogged window as they passed Yoder’s Strawberry Acres sign, Samuel came to mind. He’d been so patient with her and made it clear he was waiting to court her when she was ready. Still years away from considering marriage, she was confident it would be Samuel she’d build a family of her own with someday.

Pulling into her datt’s driveway, she swallowed hard, forcing down the stomach jitters as she dreaded facing the hundreds of people waiting to pay their condolences. The neighbors meant well, but all she wanted to do was retreat to the privacy of her room. The next few hours would be harder on her than the last six months had been. Only her closest friends, Samuel and Katie Yoder, and her immediate family knew she wasn’t Emma Byler. But in all fairness, she didn’t care who knew. She still felt like Emma Byler, even if her birth certificate stated she was Elizabeth Cooper.

Not wanting to leave the warmth of the van, Emma stayed still as they pulled up to the front door. The van stopped as she looked over to the porch and instantly remembered one of the last good days with her Mamm. On the porch, they enjoyed a late warm spell as they drank a glass of mint tea. It was her Mamm who reminded her to stop trying to write her life’s story; only Gott could do that. Her job as a Christian was to have enough faith to trust Him to write the next chapter, whatever that might be. At the time, little did she know the next chapter would be this.

Parking his truck, Daniel walked to the side of the van and opened the door. Nathan was the first one out and held out his hand to help Marie from her seat; he smiled at the gentleness with which Nathan treated his mother. Choosing to stay in Willow Springs and not return to Sugarcreek, he hadn’t witnessed how close they had become. Even with the bleakness of the day, he smiled when he caught his mother’s eye.

Marie looked toward the back seat. “Are you ready?” she asked Emma.

Nodding her head once and crawling around the middle seat, Emma pulled her bonnet tight before stepping down from the van.

Letting Nathan guide their mother up the stairs, Daniel sighed when he saw Bishop Shetler standing near the front door. Reaching ahead of him, he pulled at his mother’s coat and asked. “What’s he doing here?”

“Hush!” Marie said, turning her head back quickly. “He’s Emma’s grandfather as well, and I assume he’s here for the same reason everyone else is. Please don’t make a scene. Be cordial for Emma’s sake, at least.”

Walking up the stairs, Daniel cringed as Nathan stopped and shook the Bishop’s hand before holding the door open for Emma and Marie. Without saying a word or making eye contact, Daniel took the door from Nathan and let him follow his mother and sister in the house.

A stern but quiet voice sounded behind him. “Daniel, can I have a word with you?”

“I think the time for a word has long passed,” Daniel said in a sharp tone. “I don’t have anything to say to you.” As swift as he opened the door, he let it close, leaving his grandfather out in the cold.