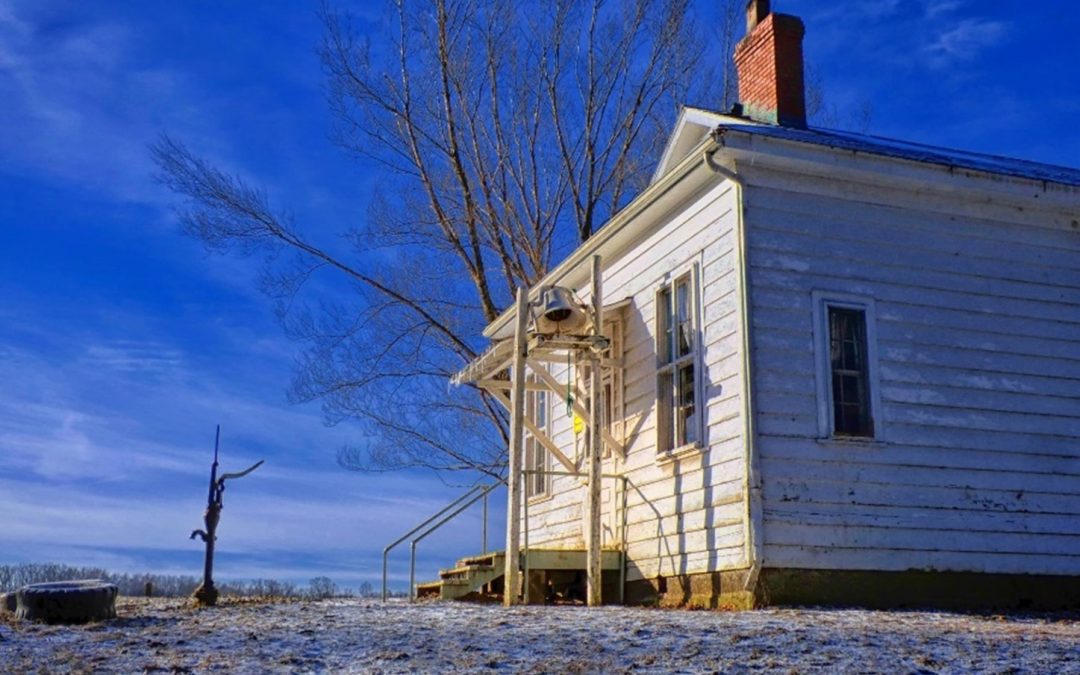 “But if we hope for what we do not see, with perseverance we wait eagerly for it.” Romans 8:25

Rebecca Byler tied her heavy brown bonnet tighter and turned her face toward the sun. The bright day did little to improve her sour mood. Even walking past the schoolhouse, with slivers of light bouncing off the shiny new bell, didn’t bring a smile to her face.

The slow and steady voices of singing echoed off the walls of the one-room structure, making her yearn for times gone by. Since graduating the eighth grade six years ago, Valentine’s Day never held the same special meaning. If she closed her eyes, she could almost see the walls brightly decorated with hand-made cards and red construction paper hearts. The snack table at the back of the room would be overflowing with sweet treats, and she could hear the squeals of her classmates as they headed to Eli’s hill for an afternoon of fun. Eli Bricker not only had the best place in the county to go sledding, but he also held the best part of her heart.

The day, much like any other day, held no excitement or hope for a brighter future. Since her mamm passed away the year before, her dreams of a home and family of her own fell to the wayside so she could care for her datt and schwesters.

An overwhelming sense of doom followed her as she made her way to Shetler’s Grocery. The never-ending to-do-list swirled around in her head along with the Bible verse Bishop Weaver added to the end of his sermon the day before.

“If we hope for what we do not see, with perseverance we wait eagerly for it.” Played over and over in her head. “How much longer do I need to wait? When will it be my turn, Lord?” she pleaded with Gott to give her the answers she longed to hear.

The bell over the door chimed twice, and Barbara Miller gave a friendly hello from her place behind the counter.

“Rebecca, it’s so good to see you. I just made a fresh pot of tea. Would you like a cup to warm you up?”

The sweet smell of chia and vanilla filled the shop, its spicy aroma guiding her to the back of the room. The small bulk food store was a popular stop for her Amish neighbors, especially on a cold day. Mr. Shetler, the shop owner, kept a fire burning all day and had four Hickory Bentwood Rockers positioned strategically around a cast-iron stove.

She took a moment to let her eyes adjust to the darkened room before removing her bonnet and gloves, then answered “That sounds wonderful.”

“How about you go sit next to the fire, and I’ll bring you a cup.”

Following the glow, her pulse quickened when she saw Eli Bricker warming his hands over the fire. Her heart did a tumble as his dark eyelashes raised in her direction.

Suddenly her mouth felt too dry to say good morning back, so she nodded and smiled instead.

His lip turned upward, and he leaned in closer. “I’d say it’s my lucky day.”

Furrowing her eyebrows together she responded, “Why’s that?”

He reached in his back pocket and pulled out a pink envelope with her name written across the front. When she didn’t retrieve it from his outstretched hand, he shook it in front of her. “Here, take it. I was going to put it in your mailbox on my way home, but since you’re here, I might as well give it to you in person.”

Unsure of what it might contain, she reluctantly took it from his hand. Before he released it, he tugged back on it until she looked up. “I’ll be waiting on the hill for your answer.”

Before she had a chance to respond, he put his wool coat on, and headed to the door, picking up a box of supplies on his way.

Only after lowering herself to the chair did she allow herself to breathe. The flap on the back of the envelope was only tucked inside, allowing her to open its contents neatly. Pulling the store bought card from its holder, she traced her finger over the array of pink and red hearts covering the fine linen card stock. At that very moment, she heard a soft whisper from somewhere deep inside her say, “Your wait is over.”

The fire’s heat added a soft rosy hue to her already flushed cheeks as she read the message Eli printed below the Happy Valentine’s Day message inside.

“I don’t think often, I don’t think much, but when I do, I only think of you. If you feel the same, meet me on the hill behind my house at noon. I’ll have both my sled and heart waiting for your answer.

With her eyes misting over, she held the card tight to her chest. She marveled over how Gott always knew precisely when and how to reveal himself to her. She prayed.

“Heavenly Father, please forgive me for the times when I tried to rush your plans. Help me to learn, to listen, and to watch for all the ways you present yourself to me. Your will, not mine. Amen.”